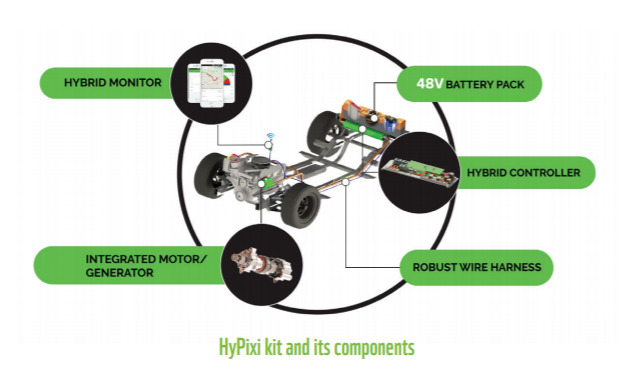 A leading source of GHG emissions and urban air pollution are on-road vehicles. The problem gets worse in developing economies like India that struggle with congested cities. Traffic snarls, poor infrastructure, and disorderly driving slow down vehicles - reducing fuel efficiency and increasing pollution levels. Hybrid and electric vehicles are the hope for a low- carbon future.

Altigreen Propulsion Labs has created a low-cost retrofit system– HyPixi – that transforms fossil fuel-based vehicles into hybrid electrics, leading to reduction in fuel consumption and emissions by over 20%. HyPixi is a fit and forget torque-assist, regenerative electric system. This powertrain generates electricity through regenerative braking, a concept used in full hybrid vehicles. In a normal vehicle, on application of brakes, the kinetic energy of the vehicle is lost in the form of friction at the brake pads. This loss of energy is prevented by the regenerative braking and energy harnessed is then used by Altigreen’s powerful motor generator system to assist the engine, thereby reducing fuel consumption and exhaust emissions. Altigreen’s HyPixi is a retrofit product that can be installed in petrol/diesel cars, as well as Light Commercial Vehicles (LCVs). The technology works by augmenting the standard (fuel-based) engine’s power through an electric motor, with no change required in the standard engine. HyPixi technology is type approved by ARAI, Pune and iCAT, Manesar. Altigreen has filed 9 patents in 60+ countries, 19 patents of which have already been granted, including 6 in the US. Altigreen has undertaken more than 50 installations till date, mostly in small commercial vehicles (<2 tonnes).


GIAN Reference: GIAN/UAL/003
Please login to view or add comments to this practice.