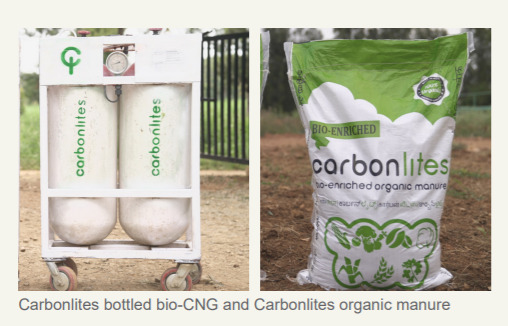 Air Pollution, Waste management: With a global population of 7.6 billion, over 50% resides in urban areas which is estimated to further rise over the coming decades. The rapid pace of urbanization has the potential to bring about great changes for the betterment of the society but also presents many environmental challenges. Globally, 11.2 billion tonnes waste is generated every year and is amongst the biggest threats affecting our ecosystem. Solid waste dumped at landfill sites produce large amount of methane, which accounts to 12 percent of total global methane emissions. Methane which is the second most common greenhouse gas (GHG) after carbon dioxide, has 21 times the global warming potential (GWP) of carbon dioxide. In India, out of the 62 million tonnes of waste generated annually across 4000 cities and towns, 50 percent is organic and biodegradable, that can be disposed in environment friendly ways.

Carbon Masters India Private Limited has devised an innovative way for managing the organic waste by collecting and converting the waste into useful fuel. Carbon Masters collects the waste generated in their bio-CNG trucks from various bulk waste generating establishments such as IT parks, residential complexes and restaurants and then treats the waste anaerobically to produce methane gas and organic slurry. The gas is purified, compressed and bottled to form Carbonlites which is used as a substitute to LPG for cooking and as fuel in vehicles, while the slurry is treated to produce organic manure used as a replacement to chemical fertilizers. Right from collection of segregated waste till the production of Carbonlites and organic manure, Carbon Masters ensures that it collects the organic waste using bio-CNG trucks and manages it to produce clean fuel through a 360-degree waste management approach. By handling the operation, maintenance and sale of the products, Carbon Masters has created a sustainable revenue sharing model, thus creating a circular economy. It has also formed strategic alliances with large corporates as well as municipal corporations.


GIAN Reference: GIAN/UAL/004
Please login to view or add comments to this practice.