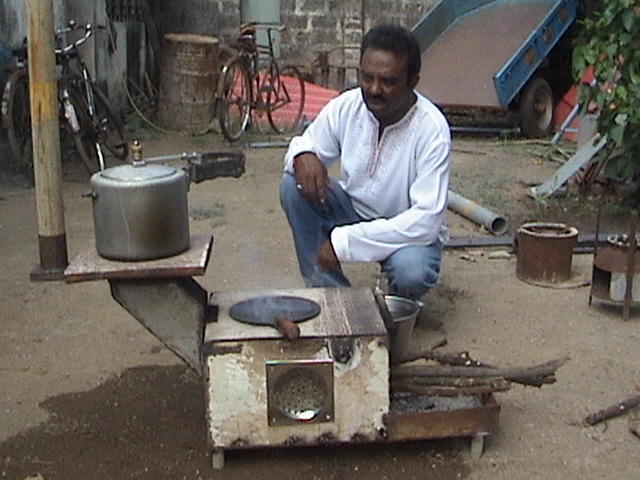 Loss of heat during the cooking on traditional chulha

Traditional wood stoves, by virtue of their design, do not optimally use the heat generated and also emit much smoke and pollutants due to incomplete combustion.Bharatbhai fitted an exhaust chute to a wood stove and noticed that a lot of heat was still coming out, which made him infer that non-utilization of heat was the major fault in existing wood stoves.He decided to solve the problem by facilitating better heat utilization through sufficient air supply and a correct channel for burning. To improve it further, he developed a mechanism for simultaneous heating of multiple vessels using the same heat source. Bharatbhai made the first model of this stove in 1999, then after a few modifications, he came up with this multipurpose stove, which two multilevel burners and a single fuel feeding point. http://nif.org.in/innovation/modified_wood_stove_innovative_windmill_-and_other_devices/355

Link: The motorized cob web cleaner has a 6 V DC motor, soft plastic brush, long plastic pipe, extendable wires and one electric switch. It uses four pencil cells. The motor is attached to the end of the pipe, which is used to locate the motor at the place of the cobweb. The plastic bush is attached to the motor shaft. When it is switched on, the shaft rotates the bush, which winds up the cob webs. This device can also be operated by domestic AC supply of 230 V using an adaptor having output of 6 V DC. As the weight of the device is under 500 g, it is easy to use and is convenient. The pipe is in three pieces, which are coupled to each other such that they can be folded at the hinges like that in a table lamp.
Manufacturing Capacity: b) Design Support
Problem Scale: 2) Around the world

GIAN Reference: GIAN/UAL/170
Please login to view or add comments to this practice.