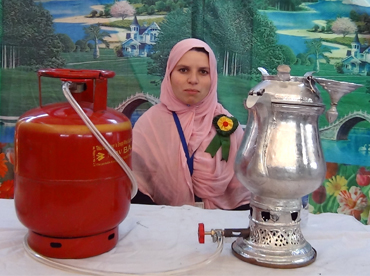 Genesis Using the samovar at home to prepare tea and also carrying it to the field for her father and brother, she realized the problems associated with itshandling. Putting effort to place coal inside and airing it repeatedlyfor hours in order to get a cup of namkeen tea. While sipping tea with her family one day, an idea to use LPG in the samovar struck her mind. Conventional method of using coal is time consuming, causes irritation to eyes, produces lots of ash, causes black patches on hands & clothes etc. She immediately shared the idea with her father, who was shocked as samovar was a traditional artefact being used since centuries and his daughter was suggesting changing a piece of culture. Convinced about her idea, Shazia wasted no time in sketching a rough diagram and explaining her father about a possible design and its functioning. Convinced, her father agreed to support her in making it a reality. Though the concept was ready but there was no one to make modified burner & regulator that can be used in a samovar. Also instead of Shazia, her father used to discuss the concept with prospective gas mechanics who could not follow the exact requirements. Unable to find a suitable vendor to execute the task, Shazia went ahead on her own. It took her about a month’s time and numerous attempts to come up with a curved burner, which could be used inside the samovar. The very next day, she went to a blacksmith with her father to get the burner fitted in the samovar. It was a proud moment for her to see her idea in reality for the first time. People got surprised when they first saw a samovar making tea without using coal and at the same time, water being boiled on it. The news spread quickly. GIAN Cell J&K, University of Kashmir noticed her work and took it further. Kashmiri Gas Samovar This is a modified version of traditional Kashmiri Samovar, which uses LPG as fuel instead of coal. Shazia has modified the traditional Kashmiri Samovar by inserting a modified curved shaped gas burner inside the cylindrical shaped fire container. She has modified the size of the common regulator by replacing the inside nipple of it, so that it (regulator) would be convenient for the small gas cylinders. She has also added supports to the rim of the samovar so that one can place a container for cooking as well. The working of the samovar remains exactly the same as that of the traditional one however the labour involved in handling coal and time involved in preparation of tea gets reduced drastically. Kashmiri Gas Samovar takes only 10 to 15 minutes to serve 25 cups of tea (as against 40-45 minutes doing it traditionally) hence not only saves precious time but a lot of human effort as well without producing ash. Moreover, extra heat which got wasted in traditional samovar can also be utilized in this innovative gadget as external supports on the rim have been provided to hold utensils. While till tea gets prepared inside the samovar, one can place an extra utensil on the external supports and can boil water or milk, make rotis, etc. NIF has filed a patent application in her name (2744/DEL/2013). She was also invited by GIAN CELL J&K and NIF to participate in the innovation exhibitions in 2013 & 2014 held at University of Kashmir & University of Jammu on the eve of 9th Regional Science Congress and 101st Indian Science Congress respectively where technology received wide appreciation and coverage. Her innovation has also been popularized through various forms of media. NIF and GIAN Cell J&K have been trying to optimize the design by taking care of the safety aspects and considering the feedback received. Plans Ahead Shazia Jan further plans to reduce human effort in handling the samovar and wants to develop a modified lighter for ignition purpose of gas samovar. At least one samovar is there in every Kashmiri household and Shazia plans to make available her samovar for them so that it can benefit them. She is grateful to her family especially her father and to her husband for all the support they have provided to her. While the urge to do something new is main cause of her innovation, she further wishes to come up with more innovative ideas and puts her message across by inspiring belief; “Agar Hasa Akh Problem Prath Kahe Nafar Panine Zindagi Manz Kar Solve Dunyai Manz Hasa Roozi Kheen Ti Problem Yus Ni Hal Gachi” (If every individual in his/her entire life solves at least one problem, one day will surely come when there will not exist any such problem in world that remains unsolved).

GIAN Reference: GIAN/UAL/179
Please login to view or add comments to this practice.