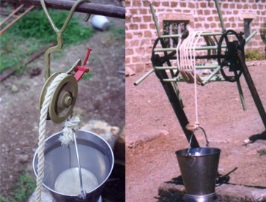 Dangerous movement of women or children during drawing water from well, which invite the accident sometimes.

The first model, Ganga is ratchet type and the second named Yamuna is roller type. In the first, safety of the person is ensured as the rope is stopped from rolling back into the well. In the second, the person drawing water from the well can even relax midway by using the stopper. In the villages, water is drawn from the wells, primarily for domestic purpose by the women folk. The originally designed rudimentary pulley system, which is also very physically demanding, is still in use for this purpose. Highly erratic rainfall, installation of submersible pumps and borings in arid areas, has lowered the water table further. This has compounded to the problems of drawing water from wells by means of a pulley. The problem despite being very real and dangerous was never taken up due to the apathy of the officials towards the affected group namely women and children.

Link: Presence of a rachet on the pulleys prevents the movement of rope of these pulleys towards the well. In the Ganga, a ratchet type pulley, there is no loss of the rope and bucket. The Saraswati is a detachable pulley, which can be used at various locations where a beam is present. Economical and easy to design and fabricated
Manufacturing Capacity: c) Sub-contracting
Photo Links:


GIAN Reference: GIAN/UAL/180
Please login to view or add comments to this practice.