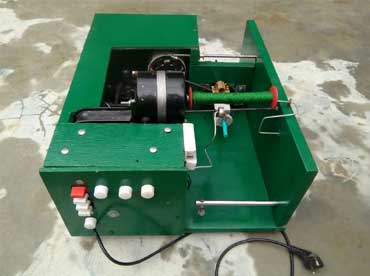 The device is developed to simplify this tedious process

This is a compact machine for simultaneous spinning and reeling of different types of silk including muga silk and eri silk. Navajit hails from a remote region in Assam where silk weaving is a traditional practice and every household has looms. His first innovation was in standard 6 when he developed a reeling and spinning machine. His innovation was triggered by his mother who is primarily involved in weaving along with her daily household chores and farming activities. Navajit noticed that the process of reeling silk is time consuming which gave her minimum time to work on other household activities. Being attentive he realized that during the reeling process, winding one bobbin manually took one hour. To simplify this tedious process, he tried replacing the DC motor from his tape recorder. A simple experiment resulted in a remarkable output where winding one bobbin only took 4 to 5 minutes. In about 40 minutes a dozen of bobbins could be prepared. His first modification was to make it automatic, so that the reeling process becomes independent. He imitated the rotating mechanism of the fan to make the reeling machine hands free. He first made different versions of spinning and reeling machine for muga silk, eri silk and the normal silk. His simple machine helped in reducing the work load and time of women in the village.

Link: A compact machine for simultaneous spinning and reeling of different types of silk including muga silk and eri silk. In the manual reeling process, winding one bobbin manually took one hour. The device is developed to simplify this tedious process.
Manufacturing Capacity: b) Design Support, e) Franchising
Problem Scale: 1) India
News Link 5:

GIAN Reference: GIAN/UAL/200
Please login to view or add comments to this practice.