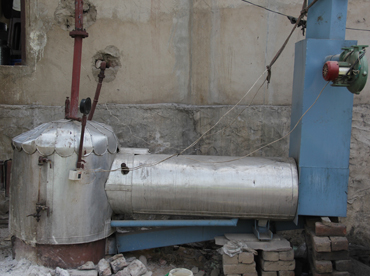 Traditionally, mawa is being made in kadai on an open stove by burning fire wood. An improved technique for the commercial production of mawa is by making use of steam for heating milk. In place of direct flame heating, the wood is burned in the boiler and steam produced is distributed to a number of kadais fitted with steam jacket. After heating the milk, exhaust steam is collected at bottom and condensed in open tank. As the systems are not properly fitted, a lot of steam escapes from various joints. These leakages reduce the efficiency of the system, which results in higher steam consumption, more wood consumption and also more of the water. As the water used in steam generation is normal (untreated) water, higher throughput of steam causes more scaling in boiler, further reducing the heat transfer efficiency and also the life of the boiler. Subhash saw a boiler based mawa making machine at an industry in Jaipur. At that point of time, he was trying to design improved boilers. After interacting with the industry person he got perturbed by the amount of wood and water consumed to make mawa. The machine used over 100kg of wood and 4000lit of water to extract mawa from 100 lit of milk. It also consumedconsiderable amount of electricity for running chiller pump to condense the rejected steam, making the whole process very costly. He started to improve the design of boiler in the mawa making machine and after almost ten years of hard work, he successfully developed the improved boiler based machine for making mawa in year 2009. Modified Boiler based Mawa Maker This is a mawa maker where the steam circuit (boiler, kadai, condenser, pipes) has been made as a closed leak proof design resulting in better fuel efficiency and minimal wastage. The used steam is also fed to the boiler alongwith condensate water through gravity. The close circuit design stops leakages, thereby reducing the additional water requirement (reducing from 1ton per hour to few liters per hour). Also the wood consumption has reduced drasticallyusing redesigned boiler with horizontal fire tubes, preheating of air with flue gases, and recycling of the steam back to boiler without condensation. The water filled in the boiler can be continuously used for a long time unlike traditional mawa machines, where it has to be filled almost every half an hour. Further to reduce human efforts, he has made the stirring operation automatic. In conventional practice of mawa making in kadai, continuous stirring is needed to prevent milk fat from sticking to the walls of container. For this, at least one person is needed at each kadai. Subhash has designed an automatic machine, which can process 10-12kg milk in a single batch with mechanized stirring and unloading of the prepared mawa. The heating requirements are accomplished by steam supplied from a wood fired horizontal fire tube boiler in closed circuit. The boiler is supplied with preheated air (heated using flue gases) by a blower, which is connected via a pressure actuated switch. The automatic operation of the boiler and machine reduces the wood consumption per unit of mawa produced considerably, while saving labour costs. This concept can also be used for efficient heating in dairy & food processing, textiles, rubber, plastic industries. Subhash is making machines with capacity ranging from 40 lit/h to 3000 lit/h (Costing Rs 60,000 to 10 lakh) depending on demand of customers. He has sold over 60 machines in different parts of North India. In all his creative pursuits, his mother has been a continuous source of help though his father believed he was wasting money. Being in a joint family also helped as he never had the pressure to make ends meet. A couple of other people also helped him to file a patent and generate resource for his work.

GIAN Reference: GIAN/UAL/230
Please login to view or add comments to this practice.