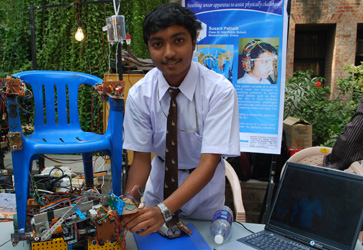 Breathing sensor apparatus for paralysed people It’s a wheel chair controlled by breathing patterns. It helps paralysis patients who cannot speak or move their limbs lead a normal life. “For example, it can go forward or backward or indicate if the occupant needs water, or food. A paralysed person can select any of these options through their breathing,” explains Susant. He thought of this idea as a class 11 student in 2009. With NIF’s help, he has developed a working prototype. Anti-theft Mechanism for Cars This is a car protection device. Each car is linked to a unique mobile number that beeps when the car starts. It alerts a person if the car is turned on without their knowledge. And to stop the thief from speeding away, calling back on the same number immediately shuts the car down. Susant claims to have successfully installed this in 50 cars in Bhopal. A similar system is available but “mine costs much less,” says Susant. Low Cost Voice-Operated Electrical and Electronics Appliance This uses voice commands to control electrical appliances through telephone. For example, if you are reaching home in five minutes and want the light to be switched on when you enter, you can call and say, ‘Light on after five minutes’. The controlled circuit then switches on the light. Super Sense Technology Right now, he’s working on ‘Super Sense Technology’. It is a circuit-based device that removes the need for a keyboard or mouse. One can attach it on the wrist and operate any computer by a slight hand movement. He is also working on an advanced model that has a jacket with an in-built computer. The jacket and the wrist band together works like a computer. You can type, draw or even access the internet – without needing a separate computer. Ideas from the Future Inspired from Films Some ideas are so futuristic they seem out of some science-fiction film. So it’s no surprise when he confesses that he loves films and watches “at least three to four each week”. And while most of the ideas came to him on his own, he admits that the Super Sense Technology was inspired from a scene in the Hindi movie ‘Krishh’. It showed a super computer being used in air. Dismissing it as ‘unscientific,” he applied himself to understanding how science could be used to make it real. Serial Entrepreneur He founded the Scientific Innovation Foundation (SIF) that promotes, generates and documents innovative ideas across the world. He also started Spintrotech India (P) to develop and market innovative products. He has collaborations with Armaan Foundation, Intel, Techpedia, and IIT-Gandhinagar. But his interest goes beyond science. 2012 also saw him setting up a merchandise company where people can design their own T-Shirts that are delivered in four working days. He is also a motivational speaker who makes himself available for visiting colleges and corporate houses to deliver lectures. Family Support Son of a veterinary doctor residing in Bhubaneswar, he has a unique take on parents. He says, “Parents can be like obstacles but only because they want you to be safe.” He continues, “My parents would have preferred had I taken the normal path of school, college, degree, and job. But I want to follow my dreams and for that, I need to take risk. But yes, they are happy with my success.” And his list of achievements is quite impressive. In addition to winning the IGNITE 2010 and the National First award at NIF’s 7th Biennial Competition, he was also an INK Fellow (in association with TED). He also received the DLF-Pramerica Spirit of Community award. Hopes for the Future His next big idea is a body suit with wheels that’s a clean alternative to cars. Put it on to glide on the road at a speed of 40-50 km per hour. It will be battery-operated and will reduce pollution because of vehicles. It’s an ambitious dream, but he justifies it by quoting Dhirubhai Ambani: “If you don't build your dreams, someone will hire you to help build theirs.” Note: Susant won the IGNITE award in 2010 when he was in class 11. He participated in the Innovations’ Exhibition at the President House in March 2011 where he displayed his innovation in front of the then President, Smt. Pratibha Patil. He also showcased his work at NIF’s stall at the Indian Science Congress in 2012. Recently, he won the National First award at the 7th Biennial Awards for Grassroots Innovation and Outstanding Traditional Knowledge organised by NIF. Honourable President Shri Pranab Mukherjee gave away the awards at a function held in Rashtrapati Bhavan on 7 March 2013. Susant is currently doing a 5-year integrated M.Sc. degree course in Physics from IISER (Indian Institute of Science Education and Research, Bhopal).

Link: His next big idea is a body suit with wheels wearing which one can simply “glide on the road at a speed of 40-50 km per hour. It will be battery-operated and will do away with pollution because of vehicles.” It’s an ambitious dream, but he justifies it by quoting Dhirubhai Ambani: “If you don’t build your dreams, someone will hire you to help build theirs
Manufacturing Capacity: d) Licensing
Photo Links:


Problem Scale: 2) Around the world

GIAN Reference: GIAN/UAL/246
Please login to view or add comments to this practice.