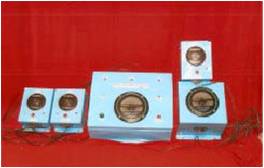 ONGC and its Security service group, CISF, were looking for a simple security device to communicate effectively among security guards in their oil drilling sites. During full phase drilling process, the generator and drilling machines produce a loud and deafening sound. In such condition, normal voice or telephone communication between security guards and control room becomes difficult and even in emergency security guards often fail to communicate quickly with one another. Aminuddin had occasionally worked for ONGC as a power and electronics repair man in the past. Knowing his expertise, he was asked by the concerned officers of ONGC to come up with an alarm system that would work in such conditions.

Initially, he came up with a simple system with a one-way alarming signal system, which connected the sub-station to the control room. The system was installed at one of the units of ONGC in Sibsagar. This model was perceived to have some shortcomings such as, inability to give alarm signal to other sub-stations and not being able to acknowledge the receipt of signal by the control room. It was necessary to develop an improved version that could enable all sub-stations to receive the alarm signal simultaneously and get alert. Also, to enable the control room to send a return receipt signal to reassure the security personals that their message has been received and help is on the way. Aminuddin finally designed a new type of security alarm device called ‘Dual Security Alarm’. In the new system, alarm signal from a sub-station goes not only to the control room but also to each of the sub-station and to a remote speaker, which can be placed anywhere in the barrack or the hall. Secondly, once the alarm is set off from a substation only the operator in control room can switch it off thus indicating receipt of message. Thirdly, control room can also give alarm signal to all sub-stations and to a remote speaker with the press of a single ‘Alarm to All’ switch. The new model was designed for one main station unit and three sub-station units. The number of sub-stations could be increased or decreased as per the requirements. In the main station unit, there are three indicator bulbs, one for each sub-station units. This indicator light is to locate the source of incoming alarm by the control room. A reset switch is used to acknowledge and stop the incoming alarm. The sub-station unit consists of one speaker, one LED indicator lamp and one push-button switch by which the security personal can pass the alarm signal to the main station and to other sub-stations. The improved model was again installed in one of the drilling sites of ONGC. After a performance validation by CISF and ONGS staff, the improved model was given a green signal for its installation in all the drilling sites and in the DIG’s office as well. The ability to control “one to one” and “one to many” emergency communication channels with loops built in for signaling from substation to main station and vice versa is the novelty of the innovation.

Link: Most of the alternative systems presently use expensive IR, FM, or GSM technology for surveillance systems3 . This current product uses transformers and simple electronic devices, which makes it simpler and cheaper as compared to its market competitors. There is also no chance of failure of system due to congestion of networks, which evidently is the biggest problem these days.
Manufacturing Capacity: d) Licensing, e) Franchising
Photo Links:


GIAN Reference: GIAN/UAL/247
Please login to view or add comments to this practice.