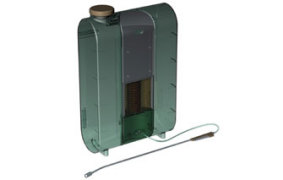 Arvindbhai Patel (48) hails from Vanch, a village 10 km from Ahmedabad in Gujarat. The youngest in a family of three sons and three daughters, Arvindbhai had only his own motivation to pursue his studies as no one else in his family had any formal education. After completing school in 1972, he got admission at Shri Vivekanand College, Ahmedabad for the undergraduate course in Commerce. After struggling hard for a year trying in vain to cope up with college studies in English medium he had to eventually quit. For two years, he worked in an automobile garage in Ahmedabad where he received practical training as an automobile mechanic. In 1980, he got an opportunity to travel to Saudi Arabia, where he worked on the latest models of automobiles. After finally coming back to India in 1984, this accomplished technician and fabricator has been pursuing his passion for innovations. He has a son and a daughter. Genesis In case of conventional sprayers, spraying is done by continuous pumping by hand. This monotonous work tires the user after some time. In addition shortage of labour is a big problem for farmers especially as spraying has to be done at a particular time, failing which the pest attacks can be a serious problem. Arvindbhai tried to think of some means by which the monotonous job of hand movement could be avoided. In conventional sprayers the basic means of oscillation is done by hand. He observed that during walking, parts of the body also generate different kinds of motion and he felt that this motion could be utilized for the oscillation of the piston in the cylinder. Mr Patel hit upon the unique idea of magnifying these jerks by using some additional weight. So he used a spring and additional weight to magnify these jerks to generate requisite pressure in the tank to spray the pesticide. This device thus works on the concept of dead–weight oscillation which causes the reciprocation of the piston and results in spraying action. GIAN and SRISTI have been trying to ensure that innovations in pest control devices use herbal pesticides rather than chemical alternatives. The proto model of the auto sprayer developed by Arvindbhai utilises the normal body movement of walking as an energy input to accentuate the to and fro movement of a dead weight, which in turn drives a piston that generates enough pressure for spraying. Arvindbhai used an iron tank to store the liquid. He chose iron, because the pressure generated in the tank is very high and a weaker material may not be able to withstand that pressure. A piston assembly is attached in the middle of the tank with an extended spindle coming out of the tank. A spring is provided on this extended portion of spindle. The piston is attached to a weight of almost 5 kg on the upper side, which rests on this spring. The sprayer is mounted on the back of the user, like a regular knapsack sprayer. When the user walks with the sprayer mounted on his back, jerks are transmitted to a dead weight, which rests on the spring. Due to jerks of walking, the spring is compressed, pushing the piston downwards. Once the spring reaches the bottom, it bounces back /rebounds and pushes the weight upward, thus pulling the piston upward and one stroke is completed. The cycle continues and pressure is generated in the tank due to subsequent strokes of the piston. This pressure is used to spray the liquid in the tank through the nozzle of the dispensing unit. Arvindbhai has now modified the configuration of the auto – compression sprayer and made a new model in which the oscillation rate of the dead weight is intensified. Two storage tanks have replaced the single one as used in the previous design. The dead weight is placed in the intermediate gap between the tanks connected by a common pipe. To avoid alignment problem the dead weight is hung at the bottom instead of the top as in the previous design. In this new model, a pipe guides the spring to avoid oscillation. Each tank has a capacity of seven and a half litres and thus the total capacity of the device is 15 litres. The cost of this sprayer is expected to be around Rs. 3500

GIAN Reference: GIAN/UAL/265
Please login to view or add comments to this practice.