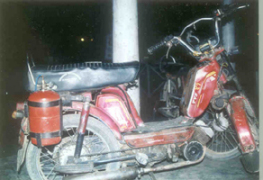 Mr Ram Kumar, 25, is an employee in a spare part shop in Hisar. He is an expert mechanic of mopeds. His father is a mason. He skipped the school because of his love for working in the auto repair garage. His employer has put up a board of Ram Moped Works due to his credibility among clients. Ram Kumar has developed an indigenous gas kit including a valve that is capable of resisting the damage caused when the moped engine might emit sparks back towards the carburetor. In that case, the valve automatically closes itself. The running cost is very low, and a small LPG gas cylinder is used for this purpose. In the year 1994, while he was a young mechanic of 18 years he saw a Maruti van fitted with the gas kit and he started thinking of developing a gas kit for moped. He studied the gas kit of the car and developed his own indigenous gas kit with different tools assembled from different vehicles. He fitted the newly developed kit in moped and then ran it for 2-3 days in the year 1994. Many people advised him to abandon this kit in the face of danger involved in the usage of gas cylinder. Moreover, it was not allowed legally to use unauthorised gas kit in vehicles. But Mr Ram Kumar was so confident of his kit that he even tested it in open space by igniting the gas in the pipe. As per his expectations, the valves used by him prevented any explosion and spread of ignition in the pipe line. In March 2000,he again fitted the moped with kit and used it for his personal work. Daily he used to run it for 10 km on an average. He even tested it first in open ground by running at different speeds. This moped gave an average of 140-150 KMGL (Kilometers per litre of Gas), while the average of petrol moped is about 50 KMGL This was used upto October 2001, i.e., more than one and half years and no safety problem arose. Now for the last over one month, he has fitted this gas kit in a motorcycle which is being run with an efficiency of about 90 KMGL. The kit costs only Rs 1500 and the moped demands less servicing (only after 7000-8000 km while petrol moped demands service after 5000-6000 km) compared to petrol engine. This moped, in addition to gas also runs on petrol. According to Mr Ram this innovation can be easily copied by anybody as the accessories are available easily in the market and his innovation is to be protected by awarding some patent.


GIAN Reference: GIAN/UAL/1007
Please login to view or add comments to this practice.