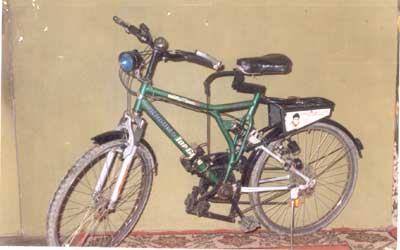 an idea struck him about using the energy wasted in shock absorbers for propelling the rear wheel so as to supplement the pedal function. When cycle bumps on an uneven road or undulating terrain, the force induced by the bump and rider's weight is stored in a battery of six springs attached under the pedal. In the first prototype, there was a problem with reverse pedaling. It was overcome by designing a new model. Kanak Das's cycle would not slow down after bumps as conventional bicycles do. It would accelerate after every bump because of its ability to convert vertical movement due to bumps into horizontal propulsion. This could indeed become a commercial success within the country and even worldwide.

Link: Easy to attach in any Bicycle, Low Cost, Support During damaged road.

GIAN Reference: GIAN/UAL/1529
Please login to view or add comments to this practice.