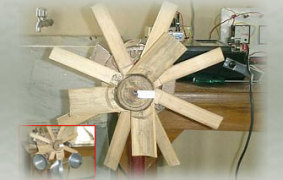 he layer of blades at the back functions as in a normal fan and sucks in the air and feeds it into the layer of blades in the front. Because of the unique arrangement of the two layers of blades, a wedging action is formed, which pushes the air forward through the front layer while producing a vacuum in between the blades. As a result, more amount of air is sucked by the back layer at a rapid pace and is channelled out through the front layer. This unique process basically improves the efficiency of the unit and sucks in and delivers more air. Due to the unusual arrangement of the blades, they develop vortex airflow, which results in higher amount of air/unit energy supplied. The cost per unit of the fan is Rs.100/-. The significance of the innovation is in the arrangement of the blades and their placement, the angle of the blades with respect to the axis, the relative position of the smaller and bigger blades and the direction control of the fan for focusing and distribution of air.

GIAN Reference: GIAN/UAL/1545
Please login to view or add comments to this practice.