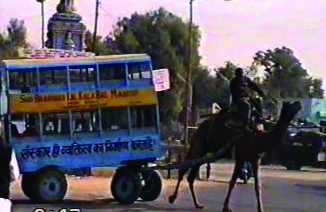 Transportation in rural areas has always been a great problem and the problem increases manifold in the desert environments.

Mishraji was concerned for the students along with their parents and was continuously thinking of suitable means to bring children safely from their houses to school and back to their houses. He even went around several parts of the country, including Delhi and Haryana, to look for a suitable answer to this problem. The school was initially using horse driven bogies and a camel driven vehicle for ferrying four-five schoolchildren. Given the terrain, buses were not suitable for carrying students. The horse driven tongas were of small capacity and expensive and were not safe and comfortable. The thought of a camel driven bus came to his mind and he approached Mewaram and other carpenters of the area. He explained them the idea of a possible larger and double decker camel bus for the school. Mewaram accepted the challenge to develop such a vehicle for children. He developed a prototype of such a bus and successfully displayed its working. As a result, the first four-wheeler camel driven bus rolled out in 1972.One of the main problems Mewaram faced was of getting tyres for the bus, as they needed to be broad to minimize the pressure on desert sand. Therefore, discarded tyres of aircrafts were sourced from Jaipur and Delhi, as they were broad and hence reduced the pressure on sand due to increased surface area.


GIAN Reference: GIAN/UAL/1589
Please login to view or add comments to this practice.