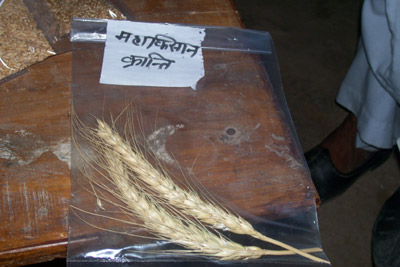 Varieties Of Wheat And Mustard

Link: It is only when he has to uproot and discard many plants while making selection he has to face some resistance from his family. They complain about throwing those plants away, which have been produced after hard labour and care. He then explains the reason behind the selection process to them, in the process making them knowledgeable and passing on his experience too. Possessing good experience in agriculture, he is invited by other farmers for guidance and assistance, so, much of his time is spent in traveling too and this invokes criticism from his wife, as he is not able to devote enough time to the family. However, the family understands his devotion to the cause and supports him in his activities. They wish he were able to help maximum people and make a name for himself and as a result making them proud too. They know he has been working hard for the past many years and hope that he becomes famous one day.Keeping their expectations firmly grounded, they wish to have a tube well in the village so that everyone is benefited and they are able to carry on their own research work, without any hinderance.
Manufacturing Capacity: Yes
Problem Scale: Grave

GIAN Reference: GIAN/UAL/1597
Please login to view or add comments to this practice.